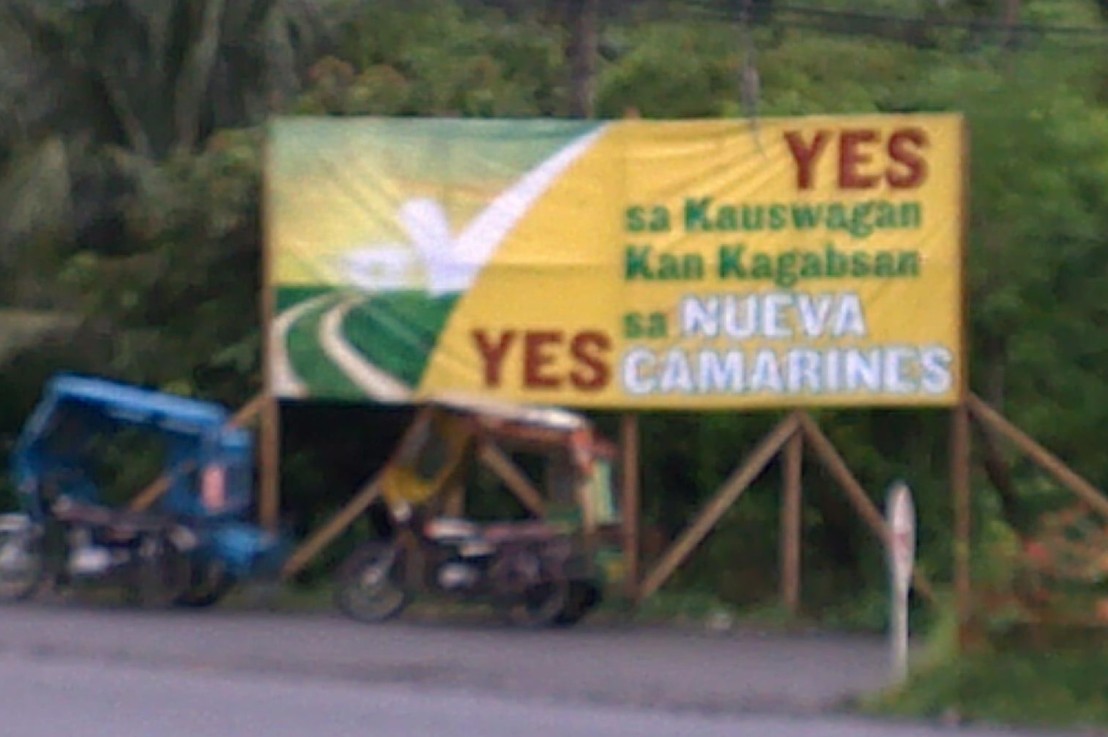 In 1992, James Carville used the economy to catapult Bill Clinton in what is supposedly an uphill presidential battle against George Bush. The slogan “It’s the economy, stupid!” not only broke Bush’s approval rating but also sharply turned American opinion that from the 90% approval rating in 1991, the then US President was hammered with a disapproval rating of 64%. Intentionally, supporters of House Bill (HB) No. 4820 are also riding on the economy as a slogan to further push for the creation of a new province called Nueva Camarines out of Camarines Sur. But is the proposal to partition Camarines Sur really an issue based on “the economy, stupid!”?

House Bill (HB) No. 4820 authored primarily by Partido Cong. Arnulfo Fuentebella seeks to create “a new province from the present Province of Camarines Sur to be known as the Province of Nueva Camarines consisting of the City of Iriga and the municipalities of Baao, Balatan, Bato, Buhi, Bula, Caramoan, Garchitorena, Goa, Lagonoy, Nabua, Presentacion, Sagñay, San Jose, Siruma, Tigaon and Tinambac.”

As of this writing, the bill is at the Senate Committee on Local Government headed by Senator Bongbong Marcos after passing the Lower House at a vote of 229 to 1 with Rinconada Congressman Salvio Fortuno as the lone dissenter.

The proposal to partition Camarines Sur is already bearing fruit. Even before any plebiscite is held, HB No. 4820 is already dividing not only the politicians in the province but also families especially those living in the Partido and Rinconada areas. It really stirred (bukag) the people that the debate which should focus on the merits of the partition has shifted to “the political versus the economic” debate and digressed further to ad hominem.

There are those, however, whose level of discussion remain at the issue of whether or not the partition will bring economic benefits to the people of Camarines Sur and the region as a whole. This is commendable because, in part, the discussion tends to highlight the merits and demerits of the proposal.

On the other hand, limiting the issues revolve around the economy misses the whole point. In the first place, the current debates on the economic benefits are only at the meso-level. As Biklish will later argue, how the partition affects the economy of whole region and the country is not mentioned in the discussions either because none tried to do a cost-benefit analysis of the proposal or somebody did it but just shelved the results being detrimental to the partition’s approval. The debates also fail to present a micro-level economic picture especially on how the new province will benefit the households of Rinconada and Partido and, at most, the rest of the households in the present province of Camarines Sur.

Camarines and the History of Division

The history of the Camarines provinces is a history of territorial fusion, annexation and repartition. The original Camarines province, then known as “Partido de Camarines” or “Tierra de Camarines”, was carved out of the Bicol province in 1636 and is composed of what is now known as Camalig and in Albay and all the present towns of Camarines Sur and Camarines Norte. Tierra de Camarines was was further divided into two – Camarines Sur and Camarines Norte – in 1829. The component municipalities of the two provinces, however, became subjects of a series tug of wars that the two provinces were fused again in 1893. For the reason that the province has become too big to administer, the First Philippine Legislature, on March 3, 2809, formally separated the two provinces through Act 2809. (For more of the history of the Bicol Region, visit Bicol History by Royal Quest Tours.)

Just like between the two Camarines Provinces, a territorial tug of war is also a reality between between Albay (originally known as Partido de Ibalon or Tierra de Ibalon) and Camarines Sur. This involved the municipalities of the now Partido Area or District IV (which was considered a part of Albay) down to Rinconada and the municipalities of what is now Albay’s Third District along with Camalig (which were then parts of Camarines Sur).

The dynamism in the territorial tug of war between Albay and Camarines Sur, however, sets aside the Partido Area. None of the provinces were enthusiastic to take in Partido because it was then generally isolated, always battered by typhoons, an “asylum and shelter of fugitives”, and is not economically productive unlike Paracale for its gold, or the stretch of Camalig up to the greater portion of Camarines Sur which has rice and other agricultural produce. In addition, its earlier inhabitants are noted to be highly independent in the sense that they have their own opinion on, and were very vocal against some of, the decrees and policies from the Catholic Church and the imperial Manila. There are even stories that Camarines Sur even disowned Partido at some point. As a result, administration over Partido changed several times from Albay to Camarines Sur in 1636, then back to Albay in 1770s, then to Camarines Sur again in 1846. (One good reference for the history of Partido is Norman Owen’s “Problems in Partido, 1741-1810”.) It was only later that interest over Partido increased and this is primarily because of the agricultural contribution and economic importance of the area during the abaca trade.

In general, it can be said that the history of fusion, annexation and repartition are centered mainly on administration of territories and on the economic importance of said territories. As if history repeats itself, the same arguments are also the basis for partitioning Camarines Sur and carving out a new province called Nueva Camarines. As the supporters of HB 4820 argue, the present Camarines Sur is too large and has become unwieldy for the present provincial government to manage. Likewise, the proposed province not just rests on the original Partido area but also eyes to annex the booming city of Iriga and municipality of Nabua.

Given these, will history again repeat itself and allow another division?

6 thoughts on “CamSur partition: It’s not the economy, stupid!”